These 5 Chefs are Making Gourmet Meals in the Wilderness 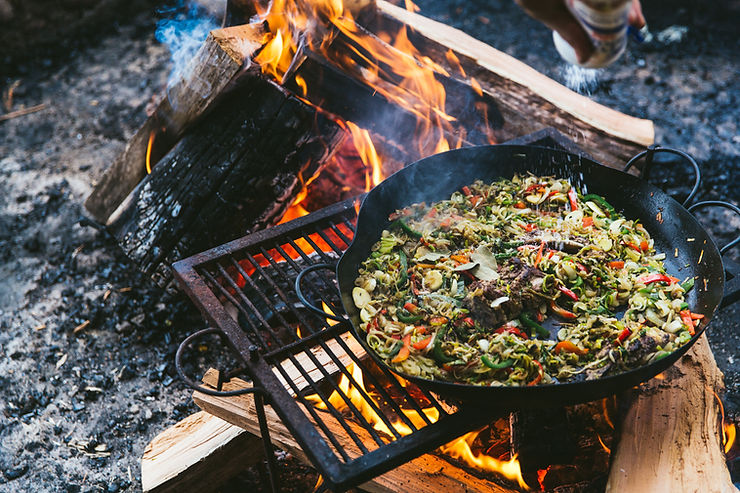 Cooking in the outdoors has traditionally focused on the simple, compact, and easily transportable, and most camping recipes across the internet seem to be focused on these core concepts. Foods like eggs, sausage, and sandwiches often take precedence when we venture into the wilderness. Despite this, a growing trend of outdoor chefs has taken over the internet, bringing the allure of luxury cooking to the more simple outdoor space. Utilizing limited equipment, often only a simple pot and fire, viral chefs all over the world are creating delicious-looking meals against gorgeous wilderness scenery, and it’s no secret why these videos are so popular. Quiet ASMR-style audio is characteristic of the genre, contributing to the serene, comfortable feeling of watching these videos, and viewers get to watch as content creators craft complicated and often unexpected meals with limited resources.

We’d like to highlight the ingenuity of 5 of these chefs, who successfully blend the primitive with the modern and bring the extravagance of restaurant cooking to the humble campfire.

Men with the Pot

Slawek Kalkraut and Krzysztof Szymanski, also known as @menwiththepot on TikTok, are some of the newest and most popular contributors to this trend. With 8.6 million followers on the platform, there is a good chance you’ve already heard of them. The Polish duo living in Ireland makes gourmet meals in the wilderness, yes, but they have the art down to a science. Impressively, every single aspect of their meals are homemade. Just in the video above, they make their own sauce by skewering tomatoes on a stick and roasting them over a fire, and make their own calzone dough using flour and oil. The result is something that not only looks extremely delicious but viewers can also tell just how complex the flavors are, as they get to watch every step of the way.@menwiththepot have also perfected that calm, ASMR-style mentioned above. Their videos include no music and instead feature the chopping of their knives on the cutting board or the sound of garlic simmering in the pan. This, we think, is what makes their videos so addicting and easy to watch. The quiet as you watch Slawek and Krzysztof masterfully cook allows you to be transported to the Irish woods in which they make their creations as you get to experience the simple joy of cooking in the woods - as opposed to the hustle and bustle of a crowded restaurant. The result is a series of videos that are both peaceful and impressive, that transport you to the comfort of the outdoors while allowing you to witness culinary mastery in action. 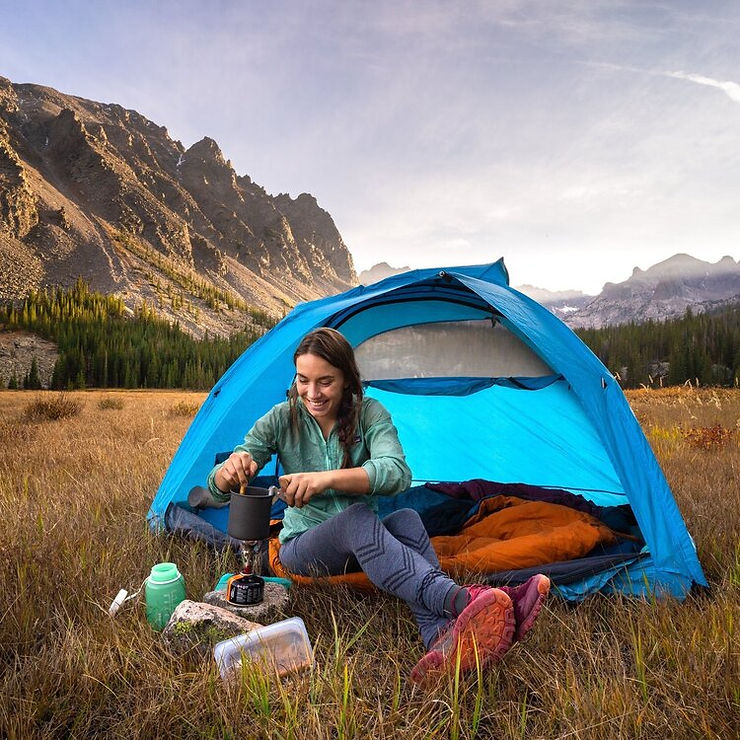 Gritty Gourmet is an outdoor recipe page that is run by rock climber, freelance writer, and innovative chef Karen Williams. As the name implies, this project specializes in bringing Gourmet style to the Gritty world of outdoor adventure. Unlike other creators on this list, who showcase their talent, often forged through years of training and experience, and are meant to be awed at from afar, Gritty Gourmet strives to bring the luxury to the everyday chef. Don’t let the stunning photos on her page fool you - her recipes are easy to follow and not overly complex. The image below of her rolling dough with a reusable water bottle perfectly captures the ethos of Gritty Gourmet: using what you have on hand to create something spectacular. 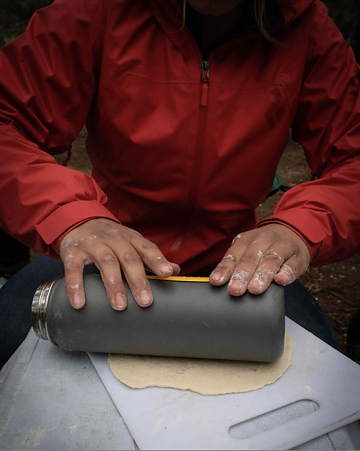 Karen has an extensive background of outdoor experience, including time spent as a Wilderness First Responder and outdoor guide, and although she doesn’t claim to be a nutritionist or outdoor expert, what she does bring to the table is a love of nature without sacrificing the luxury of indoor meals. On her website and Instagram page, Gritty Gourmet posts recipes that are not only accessible for the outdoors but are also plant based, include simple ingredients, and are adaptable to your lifestyle or specific day out. She also has several recipes that are high in protein or used to increase energy for outdoor adventures. Therefore, her recipes are accessible for anyone looking to up their game when it comes to outdoor cooking. We love her commitment to sustainable travel, too!

YouTube personality and sushi chef Taku is the man behind Outdoor Chef Life, a different kind of cooking channel that he runs with his girlfriend and camerawoman, Jocelyn. Based in California’s Bay Area, Outdoor Chef Life showcases the diversity and beauty of the area’s sea life in his stunning sushi-making videos. What really sets the channel apart, however, is the element of foraging. Impressively, Taku brings his audience along as he hunts for and captures live fish to include in his creations. Not only does this ensure the utmost freshness for his sushi, but also allows viewers to get an up-close look at the species of fish that go into each dish and the flavor profiles they constitute. Outdoor Chef Life’s videos are gorgeous, high-quality episodes that are easy to binge-watch, but what really makes his channel worthwhile is Taku’s personality. Each week, you can follow him fishing in his green canoe or cooking a new dish, and his passion for the outdoors and his craft is always there. If you like sushi, his extensive culinary knowledge and his willingness to create each dish from its most deconstructed beginning is as impressive as it is inspiring. Currently, the couple is posting videos from their life as they live in their van (a dream for many of us), travel across the U.S., and continue to showcase the beauty of sea life throughout the country.

Hasan Al-Abdullah is a Lebanese chef, CEO, and outdoor aficionado. You won’t find many of his videos in English, but the beauty of his cooking transcends all languages. At first glance, his videos are typical of the genre. They have no sound and instead focus on the sounds of the chef’s movements and nature in the background. What sets Hasan apart, however, is the level of extravagance that his meals take. To get his meals just right, Hasan will cook entire chickens on a skewer, dig huge holes into the ground to cook inside a trash-can-sized oven, and much more. This combined with cooking in somewhat extreme settings, including making chicken over a moving lake, elevates his videos to an impressive level as Hasan seems to want to challenge himself in every video he posts. His recipes may not be quite as accessible as Gritty Gourmet, but his dedication to bringing luxury to the outdoors is impressive and his videos are supremely entertaining. The recipes at @food_handcraft are traditionally Lebanese Moroccan style but Hasan puts his own twists on them, combining dishes to create something completely new - such as using pineapple to make shawarma to create complex and distinct flavors. Although this channel specializes in Lebanese cooking, it also features takes on Mexican, Italian, and other cuisines from around the world.

For our final featured outdoor chef on this list, we saved one of the most extravagant: Argentine chef Francis Mallmann. If you’re an avid foodie, you may have already caught him on season 1 of Netflix’s original series Chef’s Table. Francis Mallmann specializes in open fire cooking, constructing huge pits in the middle of the wilderness to achieve a charred taste and look to the food he cooks. For Mallmann, cooking is as much about the visual aspect, the art, and the ambiance as it is about the flavor. As a result of this philosophy, Mallmann’s cooking is quite extravagant. Him and his team of about twelve people go to extreme lengths to make meals from natural means. This could mean standing full lamb carcasses in a crucifixion style over a handmade curanto (a Chilean cooking pit), or fishing for and cooking salmon using a traditional Argentine technique: encasing and smoking it in naturally found clay. Francis Mallmann has worked in some of the finest restaurants in France and Argentina, even winning the Grand Prix, one of the most prestigious awards in European cooking. He owns 9 restaurants across three continents, so it is somewhat non-traditional that he would step away from such an empire to return to such a bare-bones approach to cooking. But for him, this type of procedure is important. It is not entirely about the meal that is finally prepared itself, but how it is prepared as well. In crafting his meals, Mallmann preserves the dreams that characterize his childhood, and continues an ethos of working hard and keeping the passion alive. It is not satisfying, he says, to be complacent or comfortable in his career, but to be continuously experiencing new ambiances and cultures, to be constantly fine-tuning his craft. In doing such things outdoors, he preserves one message: to get out of your chair and go out.

Back to Camper Van Travel, Industrial Design, and Hiking to the Horizon